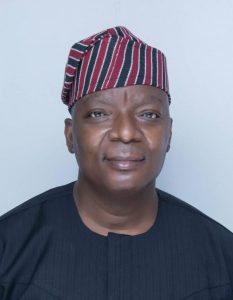 Dr. Eniayewun Ademuyiwa Benjamin was born on the 28th of July 1965 into the Rademo Royal Family of Ikorodu. He attended African Bethel Primary School between 1971- 1977 and Government College Ikorodu between 1977-1982.

Dr. Eniayewun attended the prestigious University of Ibadan where he obtained a Bachelor of Medicine and Bachelor of Surgery degree. He had his internship at Obafemi Awolowo University Teaching Hospital Ile-Ife between 1988-1989. He did his mandatory National Youth Service Programme at Bukavu Army Barracks Field Hospital in Kano between 1989-1990.

Dr. Eniayewun’s journey with Lagos State Civil Service began in 1991 when he was employed as a Medical Officer and deployed to Epe General Hospital. He was later posted to the Surgery department at General Hospital Ikeja from 1992-1993 and later to Ayinke House Maternity Hospital from 1993-1995.

Dr. Eniayewun completed his Postgraduate Residency training programme at Lagos University Teaching Hospital (LUTH) Idi-Araba in 2000. He worked as Consultant in the department of Obstetrics and Gynaecology at Ayinke House from 2000-2002 and later Lagos Island Maternity Hospital from 2002-2003.

He was posted to Gbagada General Hospital where he headed the O & G department from 2003-2009. He was also in charge of the Obstetrics and Gynaecology department at Harvey Road Comprehensive Health Centre Yaba from 2010-2013.

His quest for managerial skills and personal development prompted his enrollment at the University of Warwick where he obtained a Masters degree in Business Administration in 2015.

Among the various courses attended and certificates received by Dr. Eniayewun during the course of his professional career are the following:

Dr. Eniayewun who is a christian, is married to Mrs. Omolara Eniayewun and they are blessed with four children.