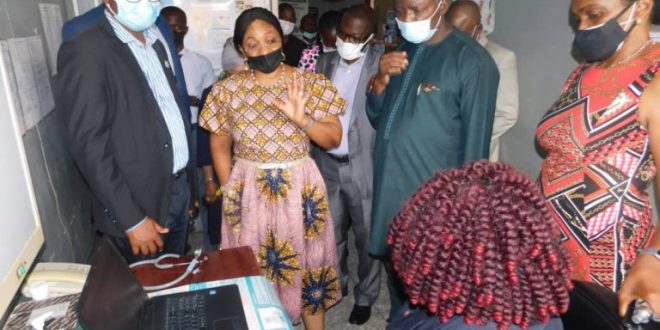 Lagos State Health Service Commission members have commenced a fact – finding tour of all 27 General Hospitals in the State, towards ensuring quality and standard service delivery that meet customers expectation, in line with the State Government’s THEME Agenda for the health sector.

To this end, three General  Hospitals of Lagos, Onikan and Island Maternity have been visited so far.

She said when staff welfare are adequately addressed, the gesture will ultimately lead to an enhanced performance that is good enough for customer satisfaction, adding that “all members of staff in all hospitals should do whatever they can to help improve health care”

The Permanent Secretary, Dr Ademuyiwa Benjamin Eniayewun said at the venue that the General hospital Lagos which is taking the lead as fulcrum of digitalization will, as a matter of necessity, be emulated by others, saying that “customer satisfaction and customer delight should hallmark staff performance”.

Speaking at the Island Maternity Lagos, Commissioner l, Dr Olumuyiwa Solanke who was once the Medical Director of the hospital, appealed to the staff to sharpen their skill towards robust contribution in service delivery, reminding them that their employment  by government is dependent on patients and patronages as improved services brings in more patients and more revenue.

In his own contribution at Onikan hospital, Commissioner ll, Dr Bolaji Olukoya  encouraged staff to work hard at ensuring that the hospital maintains it’s clean environment as that equally play a pivotal role in general well – being of patients.

While corroborating Olukoya on clean environment, Mrs Kemi Ogunyemi who is Commissioner iv, wants the hospital management to put measures in place that will strongly encourage hard work and strong commitment to duty.

Share
Previous HSC Board Members embarks on tour of Hospital Units
Next Register to attend the Year 2021 Health Forum.

Familiarisation Tour to Hospital Units by the HSC Board Members